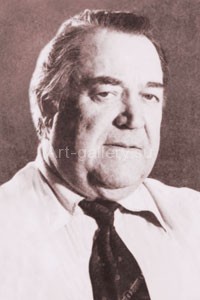 Chumak Ivan Mikhailovich born June 25, 1926, in the village Alekseevka village, Novoaydarsky district of Lugansk region.
In the period of 1932-1933, he and his family moved to Lugansk, where in 1934, and went to the first grade of the local school number 13 (the same school he studied twice Hero of Soviet Union Alexander Molodchy).
After high school he continued his education at the railway technical school of Luhansk, after graduation, was sent to restore the city.
There he enrolled in the local Institute of applied and decorative arts, training which was completed in 1954 (with honors).
After the Institute he worked a few years in art school, and in 1957 became a part of the creative team of sculptors: Mukhin, Fedchenko, Agibalov (soon left the band).
It was while working in this group, Ivan Chumak became the author of most of the monuments of Lugansk region.
In 1976 Chumak Ivan Mikhailovich was awarded the title – honored artist of Ukraine.
In 1996 he received a title of people’s artist of Ukraine.
Included among the honored residents of Lugansk.
Among the works of our countryman for the Luhansk region such iconic monuments: the monument to Taras Shevchenko in the heart of the city, a monument to the author of “Word about Igor’s regiment”, a monument to “Combat” (Slavyanoserbsk), the monument to the Worker of Lugansk and many other no less important works.