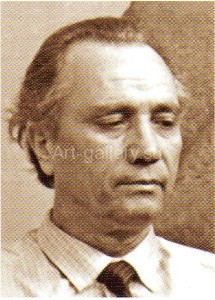 Born 04.05.1927. A member of the Union of artists of the USSR. Voroshilovgrad
The work of Grigory Sleptsova – a Golden age in the history of the Lugansk regional organization of artists of Ukraine. So said the Director of the regional Museum of art Lidiya Borshchenko about the work of the Luhansk sculptor, honored artist of Ukraine, member of National Union of artists of Ukraine Grigory Sleptsova at the opening of his exhibition. The opening of the jubilee personal exhibition took place today, October 10, eve of artists, in Lugansk in the premises of an art gallery. It is timed to the 75th anniversary of Gregory Sleptsova and the 45th anniversary of his creative activity. So the master himself called this exhibition a report in front of all the staff and the organization in particular. To congratulate the sculptor with anniversary dates came from his colleagues in the regional organization of the Union of artists of Ukraine, representatives of authorities, writers, journalists, Museum workers, students and simply admirers of his talent. Sent greetings to colleagues from the National Union of artists of Ukraine. Much has been said warm words about Grigory Slipcove as a talented and hardworking artist. After all, he is the author of many works of easel sculpture, 15 of which are located in various museums of Ukraine. Working in an art factory, Grigory Kuzmich performed a series of monuments, which were then installed in the towns and villages of the country. The most famous sculptures are the monument to John Howard in Krasnodon the monument to N. Gastello in Lugansk, the monument to fallen soldiers in stanitsa Vyoshenskaya, a bust of G. Kotovsky, sculpture “Tselinnik”, “Installers” and other. “The exhibition is his personal exhibition Grigory Kuzmich made it myself, and it turned out very good, like all his work,” said Lidiya Borshchenko. She presented a catalogue of the works of Gregory Sleptsova. At the opening of the exhibition spoke about Sleptsova and as a talented public figure. Since 14 years he headed the regional organization of the artists, 23, was a member of the Board of the Union of artists of Ukraine, was repeatedly elected Deputy of the district and regional councils. G. Sleptsov was awarded the order “Friendship of peoples”, medals “For valiant labor”. Artists day is celebrated every second Sunday of October.