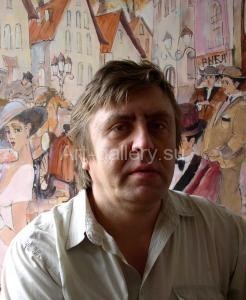 The stages of creativity

The artist has held 17 solo exhibitions in Germany – in the Cultural center of Nuremberg, in the premises Drezdner Bank in the cities of Erlangen and fürth,
at the World festivals in theater, MIME Makal-City-Theater in Stuttgart.
Currently works are exhibited in galleries in Germany and the USA.
Participant 14 group exhibitions at the National Union of artists of Ukraine. Over 2000 works are in private collections in Ukraine, Russia, Germany, France, USA, Israel.
The artist works in the style of post-modernism (impressionism) in a variety of techniques – oil, watercolor, pastel, acrylic. Also owns a portrait painting from life.
Author works of Oleg Poberezhnyy, according to critics, combine the nuances of emotions and movement, plastics and color vision with large-scale composition, architectural completeness. The artist has an original and recognizable handwriting.

Finalist and participant in 10 international contests
in Germany, Switzerland, Japan