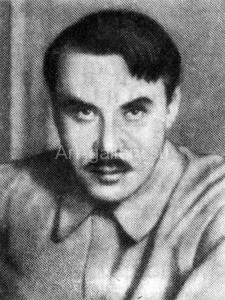 Acted primarily as a graph (in the techniques of wood engraving and linoleum, etching and drawing). Willingly turned to tempera and watercolors. Developed the principles of symbolism and art Nouveau in their more traditional, in opposition to the avant-garde vein. His landscape series is imbued with a romantic nostalgia for the beauty (Russian landscape, 1908-1916; India, 1913-1914; Italy, 1910-1911, 1925-1926, Paris, 1926; In the Caucasus, 1934); American skyscrapers even find his likeness Baroque palaces (new York. Central Park, woodcut, 1929). After the revolution easily connect this romanticism to the program of socialist realism, giving it a historical-revolutionary or industrial sounding (lots of women’s Lives in past and present, 1928; Lenin’s Mausoleum, 1930-1933; for example, 1930-1931); on the background of the average exhibition of the products of the interwar years, these leaves stood out for their refined aesthetics. In his large oil painting, immersed in the world of theatrical fantasy (Venetian feast, 1919-1921; Kiss, 1930; both works — in a private collection, Moscow). The underlying credo of romantic-aesthete, apparently, is best expressed in easel woodcuts Stradivari in his workshop (1926), which is like an allegorical self-portrait.