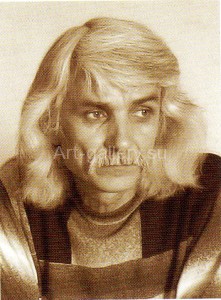 Belobrovsky Alexander G. was born 1 November 1949 the village Saliman Bogucharsky district of Voronezh region in a family of artisans.

The grandfather on the mother’s side was a wealthy farmer, a craftsman.

In 1952. the family moved to Lugansk. Father, Belobrovsky G. I., seeing the propensity of a son to painting, sculpting, were invited to enter the children’s art school of Luhansk

With 1962. by 1965. Alexander enthusiastically studied at children’s art school. His teachers were artists like N. To. Levchenko, V. A., Borodulina, I. P. Ovcharenko, V. V. Likhonosov.

In 1967. graduated from the secondary school.

After high school, working as a designer at the company.

After returning from the army working as an artist in the enterprise.

In 1977 graduated from the painting Department of the Lugansk art school.

1977. – first participation at the exhibition of young artists, Luhansk.

Since 1980. working as a teacher in a specialized art school in Lugansk.

In 1983 he graduated from the Ukrainian polygraphic Institute. I. Fedorov in Lviv .

1986. Creative trip is a trip on cities of Russia on the ship “Novikov Priboy”.

Since 1993 – member of the National Union of artists of Ukraine.

Participant of regional and all-Ukrainian exhibitions.

Included in the encyclopedia of modern Ukraine in 2003

Printed in the calendar

The art of the beginning of the 21st century”.

Works are V. Lugansk regional art Museum, the Museum of the city of Lugansk, in private collections in Ukraine and abroad, in Russia, the Baltic States,